Tony Strycharz strived for quality and always looked to improve and expand the course. In 1979 Tony had a new clubhouse built, followed by a new pro shop that was completed in 1983. The 19th hole, which was originally a cart storage area, was refurbished in 1980, almost doubling in size. Tony’s dream to enhance the course continued with the retaining of Jim Modzelesky, the club’s original golf professional in 1974 and the hiring of Jim’s brother Ken, who was on the club’s maintenance staff and eventually became the club’s course superintendent in 1989. Tony strove for excellent fairways, excellent greens and overall a beautiful course. He hired a staff to manicure the club’s numerous floral displays, which provided picturesque backgrounds for the club’s growing wedding business. In addition to a flourishing wedding business, banquets and outings of Tony Strycharz is ever present at the club. “He was the best. He could make something out of nothing,” states his proud son Mono.

Oak Ridge Golf Club is one of the first courses in the area to open each season and is one of the most playable courses year round. The course hosts prominent tournaments and charity events each year, which draw many notable participants. In addition to golf, Oak Ridge Golf Club offers an exceptional banquet facility. Mono’s late wife, Patty, played an important role in the development of the club’s wedding and banquet business. She invested her time and effort to create one of the areas most highly desired destinations for brides.

Today Mono, along with his sons Nick and Tony, continues his family’s legacy … providing the community with an outstanding public golf course and entertainment facility. 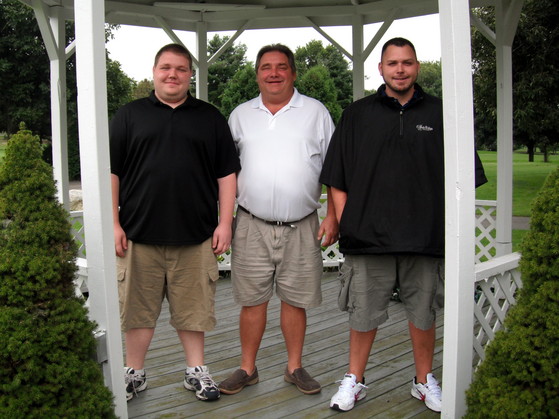